Sci-fi novels are often set in space, as it’s an unfamiliar, mystifying, and exciting premise for a technology-driven adventure. Author Razi Imam brings things back down to Earth to remind us of how much of our own world remains unexplored in his award-winning novel, Master Of The Broken Watches. Based in marine biology instead of astronomy, Imam plunges the reader into a new world of excitement, danger, and heart-pounding suspense as scientists discover something in the depths that could change humanity forever.

Masters Of The Broken Watches 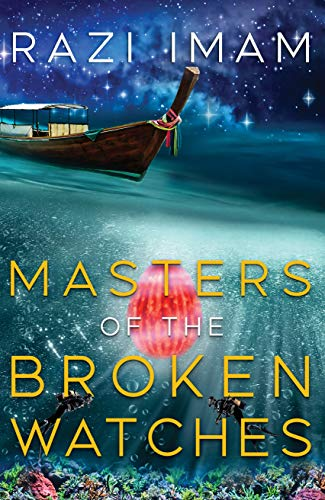 Masters of The Broken Watches won the 2020 American Fiction Book Award, and it is currently listed as a finalist in The Wishing Shelf Book Award. Effortlessly blending science, folklore, global politics, and philosophy, the novel has won over sci-fi fans, authors, and critics alike.

The novel introduces the reader to marine biologist Sebastian Miles, who accidentally stumbled upon a rare species that seems to defy the laws of time. After his team of researchers finish studying it one day, they’re bewildered that the world outside their lab had seemingly jumped in time by 22 hours. News of the researchers’ discovery is quickly leaked to world leaders, who become determined to be the first to capture Sebastian’s team to keep this earth-shattering scientific advancement to themselves.

The consequences of a country having access to the most powerful resource of all time—time itself—could be catastrophic. The researchers lead several government agencies on an intense chase as they race to inform all humankind about the implications of their discovery. Intense, gripping, and thought-provoking, this novel will keep readers on the very edge of their seats.

Razi Imam is a multi-talented author, innovator, and entrepreneur. He is the co-founder and CEO of 113 Industries, a tech company that uses AI to analyze and understand human behaviors. Imam’s deep fascination with science and technology stems from a desire to help humankind overcome serious global issues, such as poverty and disease. His goal is to write books that inspire readers to question their own worldviews and take action to help make the world a better place.