The End: YA Fiction by John Barnes

The End, an earnest young-adult novel, springs from an early idea nourished over years by author John Barnes. It also underscores an unassailable truth of the Western world: though high school isn’t quite adult real life, it’s often more frighteningly intense. It is this truth that draws generations to cruel, glitzy, often cynical versions of the teen experience in film, TV and fiction. 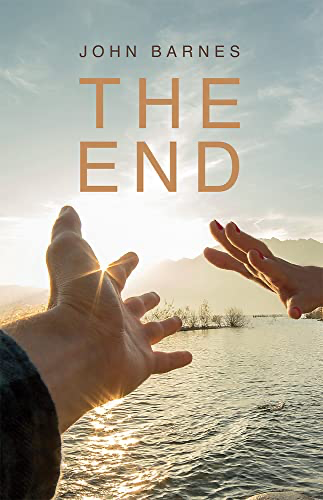 So finds our narrator, a usually genial young man, carefully navigating his way through a high-school environment at West View that contains the usual Mean Girls tropes of cool kids, freaks and geeks, alongside hints at a harder, more dystopian near future. He’s the reader’s guide to his school’s particular cliques: abstemious, pro-life and fundamentalist Sackcloths who prove distressingly literal on the word of God, the EDMs who subscribe to a pleasure-seeking, drug-hazed philosophy of ‘…eat, drink and be merry, for tomorrow we die.’

The internal conflicts at the school rumble on against a background of endless environmental disasters and international conflicts. It’s a time when tens of thousands of deaths daily are a fact of life for these students: classroom debates churn on the eternal questions of which lives our society values.

Barnes’ story functions on one level as an allegory for the perils of a bipartisan political system and the consequences of extreme views on both sides of the ideological divide. On another level, it’s a plea for religious tolerance and understanding. Its final, perhaps most appealing layer: a simpler story of a boy meeting a girl, each discovering a kindred spirit and making tentative steps to a profound first love.

The story works precisely because its hero isn’t, at first glance, all that special. The opening pages show him engaged in a silly, harmless prank of the kind typical of teenage boys everywhere. He isn’t a star athlete or an academic high-flyer. His very average-ness and the first person narration allow for a gradual building of menace and suspense as his world becomes smaller and ever more dangerous.

Whether Barnes’ open-hearted story is prophetic remains to be seen: its message, however, holds relevance for teens and adults, in the here and now. From the feelings of first love to making peace with end of the world The End is a captivating YA read.