About My Writing Process

Sailing on the deep blue ocean had always been a dream of mine. I’d done a Barefoot Cruise on a four masted schooner when I was young and single and came to the conclusion that I was destined to be a sailor. Luckily, I married a man who liked to sail, and we bought a 27 ft. water ballasted sailboat for the San Francisco bay. There’s a saying, that if you can successfully navigate the bay of San Francisco, you can sail anywhere. True, but it took me a couple of years before I could effectively scoot across the bay without hyperventilating. There were all those tides and currents, not to mention crossing the channel where international freighters hourly pressed for homeport. 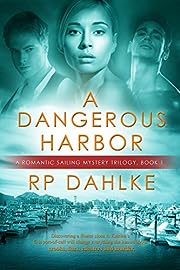 A DANGEROUS HARBOR:
#1 in a Romantic Sailing Mystery
by RP Dahlke
Buy from Amazon

But after numerous sailing classes, a couple of charters with bigger boats, and a West Marine workshop on cruising, my husband and I bought a 47 ft Hylas, rechristened her, “Paloma Blanca”, and took off for balmier climes.

I have a picture of me, wearing my foulies and gloves, nose red from the cold, holding a sign that says, “Welcome to tropical Mexico!” The Pacific coastline along Baja Mexico is not the tropics. It’s a long, dry passage with few ports for refuge should the wind turn against you. And Ensenada, the first port of call into Mexico, is a dusty little port town where Mexican fishing fleets come in to deposit fish and get their boats repaired. It also has the best fish tacos I’ve ever had anywhere?probably because it was deep fried in lard, and a reasonable marina for repairs.

It got warmer after we got to Cabo San Lucas, then crossed over to Matzatlan and points south. We did the Pacific coast as far as we dared, and still be able to get back to our Hurricane Hole in San Carlos by May. We eventually spent most of our winters in the Sea of Cortez, noodling along the coast and anchoring in the lee of some small island or port. It was, as all sailors will tell you, 90% humdrum, and 10% terror. We had long, lazy days of warm weather, kayaking over clear blue water, potlucks on the beach, and dinghy rides through kaleidoscope phosphorescent waves. We also had stormy night passages with little to no sleep, torn sails, broken rigging, barbeques lost overboard, and harrowing estuary entries. There is a saying, “Go before you can’t leave your doctor.” Which makes a lot of sense, because sailing is strenuous work, tough on the mind and body. Still, I can honestly say I had the time of my life and wouldn’t exchange those years for anything. And while I was there, I started a journal, taking notes for the romantic suspense I completed in 2011, A Dangerous Harbor (story based in Ensenada). Ensenada is, as most California sailors know, first port of call into Baja, Mexico after San Diego. Most of the town is clustered around the harbor where working marinas like Baja Naval still service American boaters.

I found this sleepy little town to be fascinating, full of endless stories, with a culture that was, and still is, struggling to gain a foothold in the 21st Century. The irony is that I started this book ten years ago, based on a local news story, which at the time was staggering in its brutality. This story is no longer unique as the Mexican Cartels daily murder with impunity. But, just as the cartels are not all that is Mexico, this story isn’t all about them, it’s about what happens when you try to run away from your problems and it’s about Americans, the ones passing through and the ones stuck in A Dangerous Harbor.

I’m now working on the sequel, Hurricane Hole (based in the Sea of Cortez).

RP Dahlke writes mysteries with humor and family dynamics taken from her own life experiences… yes, my dad, just like Noah Bains, was crabby. I was raised on a farm where my dad ran his crop dusting business near Modesto, California. I returned there to raise my two children, then married a man who loved sailing as much as I did, and we enjoyed many years aboard our Hylas 47 in Mexico. We now live in S.E. Arizona where I write mystery and promote authors of mystery with a colorful weekly fan newseltter.

Fans of mystery and those who just like to catch up with me can contact me at: rp (at) rpdahlke.com