About My Writing Process

A few years ago, my mom and dad won the Irish lottery. After they bought a house and two cars, there wasn’t much money left. Some members of my mother’s family seemed to have difficulty realizing the money wasn’t limitless. They weren’t very kind. 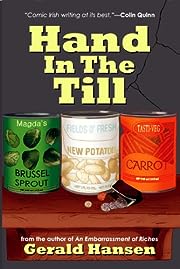 I sat down to capture this story in my first draft of An Embarrassment of Riches. After two years of writing, I realized it wasn’t exciting enough for fiction. I was too close to the people, and the real story had no arc, as is usual for real life events. So I ripped it up and began anew. I spiced things up. I threw in drugs, teen pregnancy, petrol bomb attacks, and a little girl who would stoop to any depths to procure the perfect Holy Communion Gown. And I added a backstory involving ‘my mother’ and the IRA.

‘My mother,’ because this character certainly wasn’t my real mother any more. I reimagined everyone involved in the feud over the lottery win. Someone who was a bit mean became downright nasty, someone who had more than one boyfriend dissolved into the town slut, those who drank socially became violent alcoholic thugs. And thus An Embarrassment of Riches was born.

Since it was released, it’s been a 2010 ABNA Semifinalist, comedian Colin Quinn’s second favorite book of all time (“A masterpiece,” he said), and, finally, when the sequel, Hand In The Till, was released last year, a massive bestseller. Thanks, in part, to excellent sites like BookSliced. I can’t thank the ebook industry enough for all their hard work getting writers’ works into readers’ hands. Hand In The Till is now on sale for 99 cents but, don’t worry, although the same characters are featured, the books can be read in any order.

The third, Fleeing The Jurisdiction, continues the feud between the Barnetts and the Floods, and just came out a few weeks ago. Colin Quinn will be helping me with the reading at the launch party in NYC this Sunday, and for that I can’t believe my good luck.

How do I write? The trick is totally divorcing myself from reality and letting my new creations write the story themselves. I now know these fictional characters so well, or at least my subconscious must, that all I need to do now is put them in situations (in Hand In The Till, for example, with someone accidentally stealing cans of vegetables with explosives inside, and a young girl’s dream to see Miley Cyrus in concert), and they seem to write the chapters themselves. Especially when I’m in the shower, so that I have to run half-naked to my desk to write their thoughts down!

Needless to say, my mother loves me, but as for her family, they don’t seem to understand that “the family” in the books isn’t them, although some have reached out tentatively to me, for which I’m grateful. There’s work I must do to make that come true. Perhaps another book will do it.

Gerald Hansen lived for years in his mother’s hometown of Derry, Northern Ireland and attended Dublin City University. As a Navy brat, he grew up in California, Thailand, London, Iceland and Germany. His debut novel, An Embarrassment of Riches was an Amazon Breakthrough Novel semifinalist in 2010, Hand In The Till came out in 2011, and Fleeing The Jurisdiction in 2012. Gerald now lives in New York City.